A new survey shows that patients believe their physicians are not showing empathy during office visits.

The survey was performed by The Orsini Way, a communications training company that focuses on teaching healthcare professionals new techniques to improve outcomes and patient satisfaction, and the results were released in a news release October 29.

According to the data, 71 percent of respondents said they’ve experienced a lack of compassion when speaking with a physician and 73 percent said they always or often feel rushed by their doctor.

This doesn’t paint a good picture for physicians’ bottom line as the survey also found that patients are more than twice as likely to stay loyal to a particular hospital if they have a good connection with the doctors and nurses on staff.

This matches up with a Deloitte study which found that hospitals with excellent patient-reported experience scores between 2008 and 2014 had a net margin of 4.7 percent on average as compared to hospitals with low ratings which had an average 1.8 percent.

Only 65 percent of respondents said they were satisfied or very satisfied with their interactions with their doctor when they last visited a hospital or emergency department. Which shows that in general, patients appreciate quality care, but negative interactions can color their perception in a negative way.

“It only takes one interaction to change someone’s life, and it can be anything from a routine visit with a doctor to the delivery of tragic news to a family. Every interaction counts,” says Anthony Orsini, DO, practicing neonatologist and the founder of The Orsini Way.

“The overwhelming majority of physicians are compassionate by nature. It is conveying that compassion, however, that we often struggle with,” Orsini continues. “As doctors, we are taught from the beginning to set our emotions aside, but the results of this survey make it very clear that patients have a true desire to connect with their physicians and feel their compassion. Patients need to feel seen and heard, and they need to know they’re more than just a number. Making simple, changes to the way physicians and nurses communicate with their patients can dramatically impact a hospital’s culture and change patient engagement for the better.” 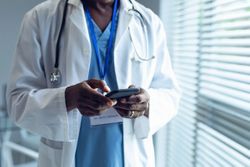