An interview with Christopher Fly, M.D.

Medical World News® (MWN) recently spoke with Christopher Fly, M.D.,who by day is assistant dean for curriculum and associate professor in the Department of Emergency Medicine at the Medical College of Georgia, in Augusta. And as if emergency medicine didn’t cause enough buzz in the space of a workday, after hours, Dr. Fly is an amateur beekeeper. The following transcript has been edited for length and clarity.

MWN: When you’re not in the School of Medicine or advising medical students, you might be found tending your back yard beehive. How did that interest start?

Fly: Well, it’s interesting, I’ve always had hobbies and I’ve been kind of eclectic, but I always wanted to have things to do outside—it keeps me peaceful, keeps the batteries charged. I think I’ve always been a little bit fascinated with it. Interestingly, I don’t particularly like honey. My wife is an excellent baker, though, and she uses it quite a bit. So, six or seven years ago, my youngest, who’s now a senior in high school, came home from school one day, and said his teacher was taking a beekeeping class. I think maybe she even brought bees to school, but my son said, “I’d like to learn about bees.” And I said, “Well, that’s kind of cool. That’d be fun. Let’s try it.” And we started looking into it. It wasn’t something I wanted to do without any kind of training whatsoever. We missed the first season we could have started, so we kept reading about it and about one year later, my son and I went to a beekeeping class just across the river in South Carolina. In South Carolina you can actually get a Master Beekeeping certification although it’s not required. Most states, particularly agricultural states like Georgia where we live, have an interest in people being beekeepers—the more bees we have, the better pollination we have.He and I went through the class together. And then we got the bees. That’s how it started. And it was a project that he and I did together for some time. And as teenagers do, he got a little less enthused with it. But I was hooked as it were and I kept doing it.

MWN: Where does one get an original group of bees to start a hive?

Fly: There are a couple of different ways but in our case one of the people involved in teaching the class who got really into it now sells his bees. So we bought ours from him. You can buy a box, or what they call a “package” that’s about 12 by 5 inches that is filled with bees and a queen. The queen is sequestered in the “queen cage” — a box about the size of a matchbox — with a few bees from her original hive. The rest of the bees are not from her hive, so they need to be kept separated for a while. Eventually she is freed from the queen cage and she will be begin laying eggs. You put that group of bees in an empty hive—it doesn’t have to have any comb in it to start. I started with a brand new one and they started building a comb almost immediately. The queen started laying eggs almost immediately. And there you have a hive.

MWN: How many bees do you have now?

MWN: Do you have a bee sting story?

Fly: I have been stung several times. As you may know, we have a little golf tournament here in the spring in Augusta. And I happened to be working there one year and the flowers are blooming and there are bees all over the place. I was standing on the course one day, watching them, and I’m not sure what I did because generally they won’t bother you when they’re on the flowers, etc. But one landed on me and stung me. I had to laugh because I wondered if maybe it was one of my bees. I live close to the Augusta National Golf Course and bees will fly three or four miles to collect pollen. So I thought, yeah, maybe was one of my bees.

I’ve been stung through my gloves. Some beekeepers work barehanded but I’m not going near that. Early on when I was feeding the bees, I had on my smock and my veil but I was wearing shorts. I didn’t think I had agitated them but one of them found my leg and boy, did I get stung. It’s probably like a lot of things in medicine. If you haven’t been stung by a bee yet you probably haven’t done it enough. Keepers who have 20 and 30 hives get stung pretty regularly. I have heard stories of older beekeepers who do it without any kind of protection. I don’t like it.

MWN: Where does beekeeping fit in to your schedule, and is it in any way like medicine?

Fly: It’s not an everyday thing. It’s just fun some days to check on the hive outside or look out the window and watch the bees going in and out, make sure everything looks normal. Probably just because it’s fascinating. In the summertime, when they’re really active, it might as well be like O’Hare Airport or Hartsville Atlanta; they’re just going in and in and out in and out in and out. It is just fascinating to me to watch. These tiny creatures know how do to all these things and know they need to do them. They go out, find the pollen source, come back to the hive, and then communicate to the rest of the bees, “OK, go three miles to the northeast for this great bunch of flowers.” It’s all done with a “bee dance” that we can’t see, but it conveys exactly what the rest of the hive should do. And this is happening in my backyard. It’s fascinating.

That’s part of why I chose medicine, to learn more about the complexity of life in the world. And there’s always something new to learn. Same with beekeeping—and I’ve learned a lot over the last five years by making mistakes and messing stuff up and trying again. This is also a sustainable hobby. I can do this for as long as I want to.

The role of continuous glucose monitoring in diabetes management 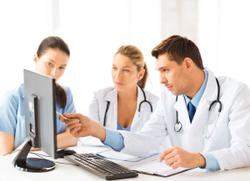