The U.S. unemployment rate remained at 3.6% in June, which brought an increase of 57,000 jobs in health care, according to the U.S. Bureau of Labor Statistics (BLS).

The June unemployment report stated it was the fourth month in a row for the 3.6% jobless rate, and the number of unemployed people was essentially unchanged at 5.9 million. “The figures were little different from their values in February 2020,” before the COVID-19 pandemic, when the unemployment rate was 3.6% and jobless total about 5.7 million, according to BLS.

Jobs in offices of physicians hovered at about 2.82 million for the third month, showing slight increases monthly since April. The figure was larger than June 2021, when there were 2.73 million workers. Hospitals employed about 5.17 million people in June, with that figure also creeping up slightly since April and larger than 5.12 million workers in June 2021, according to BLS.

Employment in offices of dentists, other health care practitioners, outpatient medical centers, and medical and diagnostic laboratories, all were steady, with slight upticks from May 2022.

The bureau reported notable job gains in professional and business services and in leisure and hospitality.

Last month, 7.1% of people teleworked because of the COVID-19 pandemic, down from 7.4% in May. The data refer to workers who worked at home for pay during the preceding four weeks, due to the pandemic.

In June, 2.1 million workers reported they were unable to work because their employer close or lost business due to the pandemic. That figure jumped by 1.8 million from May, but the report did not offer an explanation why.

BLS considers the figures preliminary and subject to revision.

In a published statement, President Joe Biden took credit for job growth and jabbed at the economy’s performance during the tenure of his predecessor.

“Today, we learned that our private sector has recovered all of the jobs lost during the pandemic, and added jobs on top of that,” the president’s statement said. “This has been the fastest and strongest jobs recovery in American history, and it would not have been possible without the decisive action my Administration took last year to fix a broken COVID response, and pass the American Rescue Plan to get our economy back on track.

“In the second quarter of this year, we created more jobs than in any quarter under any of my predecessors in the nearly 40 years before the pandemic,” Biden said in the statement. “We have more Americans working in the private sector today than any day during Donald Trump’s Presidency – more people than any time in our history.”

The president mentioned the need for Congress to pass legislation that lowers costs for families, including costs of prescription drugs, but did not address inflation that has caused price hikes for consumers, or rising interest rates. 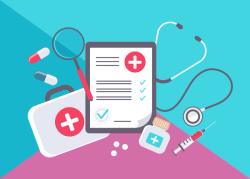