The Federal Reserve is raising interest rates 0.75% in an effort to slow rising inflation. This signals the Fed’s most aggressive move since 1994. The central bank also downgraded its economic forecast. The Fed said it expects the economy to grow 1.7% in both 2022 and 2023, down from its March estimate of 2.8% and 2.2%, respectively.

While the increase was expected, the amount is 25-basis points higher than the bank originally projected earlier in the year. As inflation has continued to rise with no sign of cooling, the Federal Reserve increased the amount of the increase. Economists say the central bank is risking a recession in order to slow rapidly rising inflation.

In just the last few days, the Fed has received plenty of economic bad news. Government data showed consumer prices rose 8.6% year-over-year in May – the fastest pace of price increases since 1981. In addition, the scope of inflation across the entire economy shows little signs of slowing.

Consumer sentiment has fallen to the lowest level ever recorded, dating back to the mid-1970s. As a result of these negative economic reports, there was an extensive stock sell-off with the S&P 500 entering a bear market at the close of trading Monday.

Fed officials have carefully readied investors for successive 0.5% rate increases, which represents the fastest pace in more than 20 years. But now the bank leaders will be admitting that wasn’t fast enough, leaving markets to wonder what the future will look like.

That future is likely to include more big rate hikes. The Fed forecast the federal funds rate to end the year between 3.25% and 3.5%, suggesting that another 0.75% increase in July and a 0.5% increase in September are likely.

The Fed said it is “strongly committed” to returning inflation to the 2% range.

The increase will affect much of the economy, pushing up rates for credit cards, home equity loans, and mortgages. Fixed 30-year mortgages have increased to 5.23% from 3.22% earlier this year. On the flip side, those with savings accounts will should see higher bank saving rates after years of near-zero returns.

High unemployment may be the only way to stop inflation 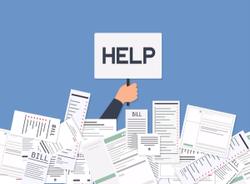 Patients accrue medical debt not just from a lack of money, but also a lack of understanding