The nation added 53,000 healthcare jobs last month, but jobs in healthcare and social assistance are still down by 1 million from February.

The U.S. continues to add healthcare jobs, but the nation is still down, according to the latest jobs report.

An economic news release from the U.S. Bureau of Labor Statistics says that overall total nonfarm payroll employment rose by 661,000 jobs in September with the unemployment rate declining to 7.9 percent as the nation attempts to bounce back from the economic devastation already wrought by the COVID-19 coronavirus pandemic. Of those new jobs, 53,000 were related to healthcare.

Together, healthcare and social assistance saw an increase of 108,000 jobs last month, but are still down by 1 million jobs from February, the release says.

While the growth seems to be slowing, the forecast does seem to be improving from April when a weekly survey performed by the Larry A. Greene Center and the Primary Care Collaborative found that 47 percent of respondents said they were unsure if they would have enough cash to stay open and 85 percent said they had seen a dramatic decrease in patient volume during the pandemic.

A late-August edition of the survey found that 89 percent of respondents said they were confident in the ability of their practice to stay open for the next four weeks, while 44 percent said they were receiving financial support through federal programs. 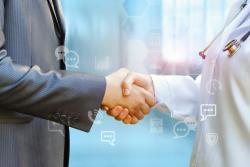