Joseph DeVeau, MD, found himself burned out due to overwork and shared tips on how to avoid the condition

Joseph DeVeau, MD, says he started feeling burnout after he was sued.

DeVeau, MD, a physician and virtual health medical director for Privia Health out of Fayetteville, Georgia, told his story during a presentation October 14 at the Medical Group Management Association (MGMA) 2019 General Conference in New Orleans.

“[A lawsuit is] devastating for us doctors in many, many ways and had me questioning whether I was a good doctor,” he says. “It really kind of started the decline for me in terms of burnout.”

As a busy family doctor who had 4,500 patients between himself and his nurse practitioner, DeVeau tried to just push through it and felt like he was running on a “hamster wheel.” He eventually felt that he was reaching a breaking point.

That’s when he read the JAMA article title “Addressing Physician Burnout, The Way Forward”, by Tait Shanafelt, MD, the so-called godfather of physician burnout, which gave him a name to attach his feelings to, and outlined a way out.

What DeVeau couldn’t understand, though, is why his peers weren’t talking about the issue. So, he left clinical practice and entered the Brown University Master of Healthcare Leadership Program to create a conversation around burnout.

Through the program, he was tasked with identifying a problem in medicine and identifying solutions for it. He focused on the burnout he was feeling in his practice.

“Through that program, I really, kind of, healed myself and really love doing what I do again,” he says.

During the session, he helped the attendees identify what physician burnout looks like and what sort of actions can be taken to address the issue.

Who is suffering burnout?

DeVeau says 44 percent of American physicians are exhibiting at least one symptom of burnout, including 54 percent of family doctors like himself. Symptoms include emotional fatigue, cynicism, depersonalization, and a loss of meaning in the work.

Without any intervention, patients will not be able to receive the care that they need either due to a decrease in quality or a decrease in access. It can also increase healthcare costs, he says.

There has been a decrease in burnout rates since 2014, according to DeVeau, but the top three specialties that can be affected are emergency medicine, OBGYN, and family doctors.

Throughout the session, DeVeau presented a wealth of suggestions for how to prevent and combat physician burnout. Some of these include: 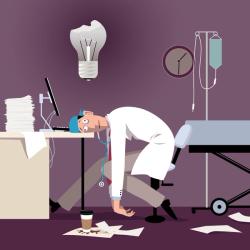 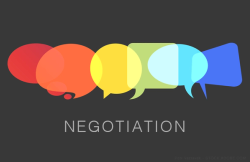