Health care cost increases are not the result of over-utilization, but rather legalized kickback schemes.

As a resident of Minnesota, I recently saw our own U.S. Senator Amy Klobuchar on television discussing her new book "Antitrust". Because the senator has long been an outspoken critic of price gouging and other anomalies in our health care system, and because I have spent the past 40 years as a health care attorney and lobbyist, I decided to read her book, and share my perspective on some of the health care issues it raises, and to suggest some possible solutions.

We have allowed our health care system to fall victim to a highly consolidated group of pharmacy benefit managers (PBMs). These organizations control drug pricing using formulary inclusion fees and other bizarre techniques which we permit to the detriment of those who need life enhancing or life-saving medications. We also permit the acquisition of patent rights for orphan drugs (important drugs that don't have a large market) by venture capitalists who corner the market and raise prices to very high levels because that's the point of cornering the market. Such conduct may or may not be illegal but it certainly is immoral.

Drug costs in the United States are regulated in an unusual way among industrialized countries – hardly at all.

The United States is exceptional in that it does not regulate or negotiate the prices of new prescription drugs when they come onto market Some commentators argue that in a free market it is not the role of government to do this. But we don't have a free market. If one considers the essential elements of a free market, we're not even close when it comes to health care. We need Medicare to use its group purchasing power to restrain drug prices. But we can’t seem to get that done which is ironic because our antitrust laws seem to favor group (consolidated) purchasing.

Others argue that if we did lower drug prices, we would be making a trade-off. Lowering drug profits, they say, would make pharmaceuticals a less desirable industry for investors. And less investment in drugs would mean less research toward new and innovative cures. But many, if not most, of new drugs developed have had the benefit of government grant funding (at taxpayer expense ). There would still be plenty of money to be made in the pharmaceutical industry if it were subject to reasonable regulation. If our government approached cancer, heart disease and dementia with the same truncated timelines and sense of urgency as Covid-19, there would be great innovation and profits.

The courts make these decisions by weighing the pro-competitive and anti-competitive factors associated with the vertical integration on an individual case-by-case basis, but only if such cases are brought forth, say, by The Department of Justice (DOJ). If I were a sitting U.S. senator of the party in power, I wouldn't be making phone calls to drug company executives. I think I would be talking to the DOJ.

Our health care system has antitrust problems but monopoly is not at the top of the list. Rather, the problem is monopsony.

Senator Klobuchar herself introduced the Consolidation Prevention and Competition Promotion Act, which would insert "or a monopsony" after every instance of the term "monopoly" in Section 7 of the Clayton Act. The Federal Trade Commission has held public hearings to discuss the topic. Despite the recent interest in monopsony, the lack of case law on the topic means that the antitrust agencies may well have a more difficult time advancing cases based on buyer power, as compared to seller power. Perhaps that's why the business strategies in health care embrace the monopsony concept.

There are those who argue that monopsony is only an issue if it ultimately causes consumers to pay higher prices. Others argue the activities that create a monopsony (whether by merger or agreement) are, or should be, unlawful.

Either way, we need to do something. Here is a suggestion of an action that could be taken at the state level. Let us repeal Certificate of Need (CON) laws. These little anti-competitive gems prevents doctors or anyone else from building new hospitals. The original justification was to control health care costs, increase health care quality, and improve access to care for low income people. There was also the desire to protect our current hospitals from competitive forces to ensure their survival, and if we had more hospitals, sick people would just use them and drive up the cost of health care. The CON strategy was first adopted in 1974.

In my opinion the use of CON has been a complete failure in every aspect of its original intentions. Someone once said “the road to hell is paved with good intentions”. Never in medicine has this been more true than now. With hospitals full, and turning away patients (not just COVID-19 patients), and insurance companies being acquired by national drug store chains, people are beginning to realize that health care cost increases are not the result of over utilization, but rather legalized kickback schemes. Without fair and effective government oversight, this death spiral can be expected to continue. Large corporate systems acquire small outdated facilities, not to improve them, but to close them in order drive patients to regional centers for system financial gain.

Currently, there are 35 states with CON laws; 24 states have repealed such laws. CON has increased heath care costs in the states which have retained this failed relic of the past.

It's time to bring competition back to health care, while at the same time regulating anti-competitive practices and price gouging. The repeal of this outdated, failed and ill-conceived hospital construction moratorium law would be a good start. Nonprofit hospitals don’t need this kind of protection. They pay no property or income tax, and they provide little or no real charity (unless you count their write-off of bad debt after they have forced low-income patients into bankruptcy, or their nonsensical claims of "community benefit" which is a fabricated term that has no real meaning). For-profit organizations use this state sponsored franchise mechanism to enrich themselves but more importantly to assure that an industrial engineering approach to medical care will replace MD physicians with mid-level practitioners, technicians and other non-MD “providers”.

All of this is occurring without patient knowledge or consent, partly because of deception (the increased prevalence and allowed use of the title doctor by non-MDs) and partly because of the system consolidation factors discussed above. Everyone talks about patient choice and involvement in their own care but what could be more basic than choosing who will treat you?

The time has come for patient rights legislation to require the disclosure of the “doctors” credentials. The time has long passed for many to get off their high horse and acknowledge the need and desirability for things like “any willing provider legislation” to give patients choice and access to doctors of their choice.

So now let’s try something different. Let’s give these vertically integrated monopsonies a little competition. It's time to stop protecting those who price gouge, those who claim to be charitable but are the leading cause of bankruptcy. Doctors and technology are not the cost drivers in our convoluted system. The problem is the system itself, coupled with the lack of any meaningful oversight. If you’re waiting for what remains of medical association advocacy and state licensure boards to take action, you’re in for a long wait. It’s time to do something else. Dumping CON would be a good start.

David Feinwachs, M.H.A., M.A., J.D., P.H.D., is a health care attorney and lobbyist in St. Paul, Minnesota. He was general counsel for the Minnesota Hospital Association and Aging Services of Minnesota from 1981 until 2010. He was a senior lecturer at the University of Minnesota’s Carlson School of Management and School of Public Health until 2019. 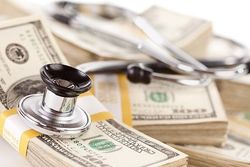