Taras Mahlay, MD, is an internist with University Hospitals in the Cleveland, Ohio, area. Mahlay’s parents emigrated to the United States from Ukraine in the 1940s to escape the Soviet Union, but Mahlay has always stayed involved in the Ukrainian community. Now the physician is helping the war-torn nation by helping to collect and send needed medical supplies. The interview below has been edited for length and clarity.

Medical World News®: How did you get involved with collecting medical supplies and sending them to Ukraine?

Mahlay: I’ve always been involved in the Ukrainian community. And since Ukraine became an independent country in the 1990s, I started traveling over there. And actually, I met my wife there, who is also a physician. I’ve always been helping with supplies, and even lecturing in Ukraine. Basically, I’ve been getting them more prepared for the Western world as opposed to the old Soviet state.

Medical World News®: What sorts of supplies have you been sending?

Mahlay: At first, we just would ask for any supplies. We’re getting a lot of PPE (personal protective equipment), gowns, gloves, masks, and sanitizing items. We had tremendous gifts from various hospitals and from people to the point that we were really stocking up on those things. Now I’m in contact with Ukraine, both with my colleagues there and with the Department of Health. ... Technology is pretty instantaneous, so I’m getting texts, Facebook messages, (and calls or texts through) Viber and WhatsApp with the needs of the different hospitals. And the biggest thing that they really need is wound care.

You do see some of the things that are happening on TV and on the internet. But there’s a lot more injuries than the 1 bomb or missile that hits an apartment complex. So there’s many injured (people) and the hospitals are overfilled. Right now we’re mostly sending gauze wraps and orthopedic supplies, because there’s been a lot of broken bones, and IVs.

Medical World News®: How do you get the word out to get the supplies?

Mahlay: After the invasion happened, the next day I was on the phone, calling different vendors and hospitals. In my community after 30 years, you develop a lot of relationships. It’s been overwhelming how much everybody’s been helping.

Medical World News®: And you already had the supply chains established for getting them materials over there, it seems?

Mahlay: Well, yes. But before, there was no rush; we would collect things, … gather enough pallets until we had enough for a shipment that would … show up in 4 to 6 weeks. Well now they need it yesterday. The other problem is (that regarding) all the major cities in Ukraine, we can’t ship (to them) because of the war. So our chain is now flying it into Warsaw. And then from Warsaw, we have truckers that are coming from Ukraine across the border, picking up (the supplies and) driving them across the border. It’s basically volunteers driving the trucks. I don’t know all the details now because it changes daily, depending on what’s getting bombed, what’s not getting bombed, and where you can go and what bridges are out.

So our supply chain has changed significantly from what (we’ve been) doing over the last several years. And whenever we send a shipment, it becomes a lot more difficult. But we do have some people on the ground and we try to monitor that the shipments are getting to the hospitals.

Medical World News®: What do your patients, colleagues, and people you encounter here say when they hear what you’re doing?

Mahlay: Everybody’s encouraging. My office manager has kind of blocked off time on my schedule. In between patients I’m calling vendors, doing the logistics, and people are calling me. My partner said, “Whatever you need, take the time off, do whatever.” My patients started asking me questions (about) where to donate and how to donate.

Medical World News®: How long do you think you’ll keep doing this?

Mahlay: My plan is to do as much as I can. 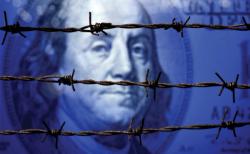